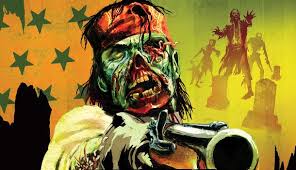 So the DLC was released on the 26th.  I bought it earlier today and spent a bit of time on the single player.

The gameplay is completely different to the normal Red Dead single player – it’s a helluva lot more frantic and ammo is sparse so, gone are the days of ammo-hoarding and complete and utter pwnage on the AI enemies.

Towns get overrun by the stinking cadavers and you can help surviving townsfolk reclaim their towns in a feat similar to the turf wars in San Andreas.  The zombies seem to be never-ending and you have to constantly check over your shoulder/pan the camera round to ensure so sneaky bastards get the better of you.

One thing that I was amazed by (and most people won’t appreciate this) was when I left Blackwater and made my way for Thieves’ Landing and I stopped by a hysterical fellow sat next to a body who appeared to be dead.  I assumed it was his friend and he clearly had been attacked by an undead ne’er-do-well.  Suddenly, the supposed dead chap lurches upwards only to have his head blown off by his buddy who then presses his own gun against his temple and blows his own brains out in an act of sheer desperation.  It seems like such a small and insignificant event but it truly immersed me in the world where many movies have tried to go but never seem to nail it.

No doubt there are plenty of delights such as this filling out, what I would class as, the best DLC for any game.  Ever.

As for the online side of things, I have only watched the live stream on the Rockstar site but I shall endeavour to get on there tonight because it looks amazing and even more carnage compared to the single player.

I’ll no doubt post something of more substance once I’ve racked up a respectable amount of (dead) dead bodies.

So, in the meantime, stay safe or stay dead.